MUMBAI: Hindi film actor Sushant Singh Rajput, who brought a riveting vitality to his performances in films like Kai Po Che, MS Dhoni: The Untold Story and Detective Byomkesh Bakshy, was found hanging at his Mumbai residence on Sunday.

Rajput, who made the storybook transition from Patna boy to television and then the starry lights of the Hindi film industry, was the youngest of five siblings and is survived by his father and four sisters.

“His body was found hanging at his Bandra residence today. We are investigating,” said Manoj Sharma, additional commissioner of police, Western Region.

An accidental death report will be registered on the basis of preliminary information sources from the Bandra Police said. No note was found from the spot, they said.

Police sources also said they did not find any foul play in their initial investigation. A medical report about the cause of death is awaited, the police said.

Rajput’s last screen appearance was Nitesh Tiwari’s 2019 film “Chhichhore”, where he played the role of a father who conveys a message of hope and affirmation to his son who has attempted to kill himself. 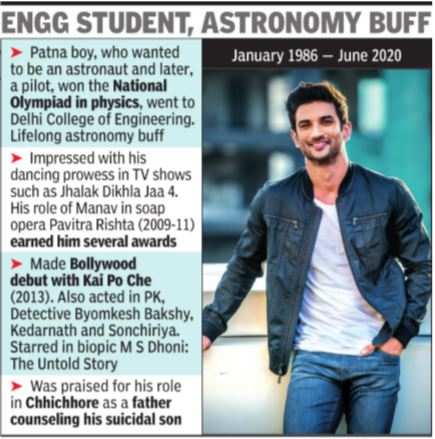 His last social media post, dedicated to his late mother who died in 2002 when he was a young teen, was on June 3. “Blurred past evaporating from teardrops. Unending dreams carving an arc of smile. And a fleeting life, negotiating between the two,” he wrote on Instagram, with a black and white photograph of his mother.

“It’s such devastating news. My deepest condolences to Disha’s family and friends. May your soul rest in peace,” he had said, mourning her death.

Back home in Patna, as crowds gathered outside Rajput’s father’s home, Laxmi, the caretaker, told mediapersons that the actor’s eldest sister who lives in Chandigarh would be flying in to accompany their father to Mumbai.

“The last rites will be performed after his father and other family members arrive in Mumbai from Patna tomorrow,” his spokesperson said.

As news of the tragic death spread and condolences poured in, Prime Minister Narendra Modi described him as a bright young actor gone too soon.

“He excelled on TV and in films. His rise in the world of entertainment inspired many and he leaves behind several memorable performances. Shocked by his passing away. My thoughts are with his family and fans. Om Shanti,” the prime minister said on Twitter.

Sushant Singh Rajput…a bright young actor gone too soon. He excelled on TV and in films. His rise in the world of… https://t.co/1SGDaJ0TjW

He also performed as a background dancer in the song “Dhoom again” with Hrithik Roshan and Aishwarya Rai Bachchan in the 2006 film “Dhoom 2”.

But it was the small screen that gave the “outsider” his breakout role as the mild-mannered Manav in the Ekta Kapoor-produced soap opera ‘Pavitra Rishtaâ’ in 2009.

LAC stand-off: Not just a border conflict, there’s much more to it | India News

Need six weeks of serious training to prepare a shuttler, says Gopichand as training may start from July 1 | Badminton News